A Conference of Good Intentions 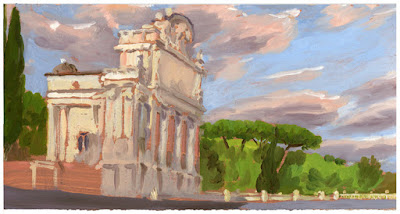 I recently had the opportunity to present a talk at the Colin Rowe conference in Rome; I spoke on my research for my chapter on the Baroque City in the forthcoming Oxford Handbook of the Baroque, looking at the ways Rome influenced disparate cities and cultures across Europe in the seventeenth and early eighteenth centuries. I was in one of three parallel sessions during the second of three days of presentations (the full trifecta requiring more stamina than I could muster). The parallel sessions, their titles notwithstanding, were dedicated to practice, history, and teaching. Now, Colin Rowe was an historian who taught architectural design; and if nothing else, Colin (who, unhappily no doubt for him, was my professor in Rome many years ago) made history relevant to practice when Modernism said it had no place. And if he succeeded only briefly—history is again on the wane, even more than it was in the sixties—Colin would have found the separation into three rooms just a little bizarre. What would have troubled him most, I think, is the notion that the New Urbanists presenting their practices presumed all the historical questions have been answered: we’ve got that history component figured out, let’s build! To anyone who’s spent any time reading Colin’s writing, the notion that the problem of history is a settled case has got to seem decidedly un-Rowian. Colin’s whole method, and certainly his rhetorical style, was to posit possibilities, intriguing potentialities that just might yield some interesting things, if only one would give them a try. That sense that architecture was a constant experiment, a particularly English tinkerer’s approach to improving things, is one way that he was firmly rooted in Modernism. Deeply suspicious of claims for perfection, much less for the delights of Utopia, he could never accept the classical academic notion of synthesis. He was much more interested in juxtaposition.

So, then, what is it that the New Urbanists think has been settled about history? Judging by both the work and the rhetoric, the only history that has anything to offer began roughly around the time that suburbs started in the nineteenth century, and ended sometime around the Second World War. A rather narrow slice of the historical record, it has the advantages of not challenging too much the largely banal results of the Modernist revolution. Why look at Filippo Juvarra in Torino when you’ve got Raymond Unwin in Letchworth? If you’re satisfied with competent infill, pre-War suburban densities, and some mixed-use, the heritage of the great cities of Europe at their best (and still, by the way, thriving), not reduced to their lowest common denominator, is irrelevant (if subliminally threatening). Driverless cars are apparently more compelling than the effects of carriages on Baroque Paris. So, let the “historians” (we were, in fact, mostly architects) talk about Renaissance Rome and seventeenth-century Amsterdam. We certainly didn’t draw the crowds, because there was no profit to be had in our retro-room. Still, I can’t avoid an image of Colin’s ghost at the whole event, perhaps not excessively troubled, but no doubt rather bored.

Posted by Emulatio at 16:26 No comments:

Email ThisBlogThis!Share to TwitterShare to FacebookShare to Pinterest
Labels: urbanism

The Joy of Experimenting with Traditional Techniques 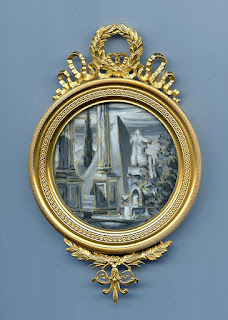 Only in Florence. Zecchi, on the via dello Studio, is one of the world’s great art supply shops. Not necessarily because of the quantity of goods on display (it’s actually rather small, just one room), but for the quality of the traditional media available and the knowledge of the proprietors. Having supplied the raw material for generations of artists working in traditional media like egg tempera and fresco (I’ve bought my pigments for fresco here since I studied with maestro Leonetto Tintori in 1989), they’ve taken to packaging their own paints in egg tempera and oil, along with all the exotic ingredients for working in traditional media. Stopping in a couple of weeks ago, and having had for a while an interest in experimenting with the gouache on vellum (sheepskin) techniques of 18th century artists like Marco Ricci, I asked for a sheet of pergamena (sheepskin or vellum), and was conducted (for the first time in my experience) to a back storeroom where they stored, among many, many other things, a roll of sheepskins—yes, the skins of sheep, laid out looking like the headless and legless bodies of sheep. I learned that pergamena was treated in a way that tended to make the top surface water-resistant, so for the watermedia I intended to use I needed to treat it with ox gall (fiele di bue), the bile of an ox’s gallbladder; Zecchi sells it under their own label. To some this bilious media might be old news, but for me it had the ring of the ancient and exotic about it. I learned later (online) that it had some interesting properties for watercolor painting; its role with sheepskin is to make the surface able to accept or bond watermedia like gouache.

What actually spurred this interest in gouache on vellum was an elegant little bronze frame I’d bought months earlier in Florence at the remarkable shop of Duccio Banchi on the via del Serraglio in the Oltrarno. Father and son still make these refined bronze frames and decorative objects, and the one I’d purchased seemed to call for something appropriately delicate and classical. I worked out a series of subjects based on 18th century capricci, in monochrome, and gave them my own spin by treating the scenes as narratives, of a kind (I’ll leave it to you to read them). Letting a bit of the vellum read through gives the grisailles a warm aspect. The images here show the process from the raw sheepskin to a smaller section prepared with ox gall to the painting of the scenes, Diana at Her Bath and Hercules at the Crossroads. 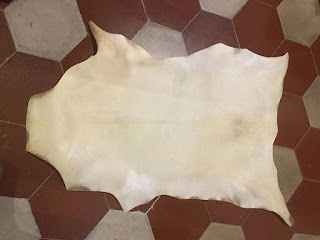 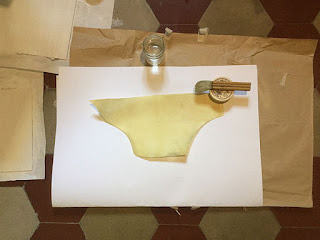 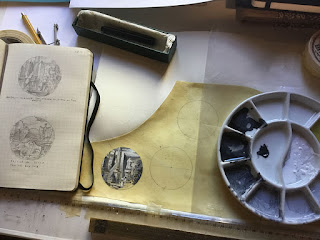 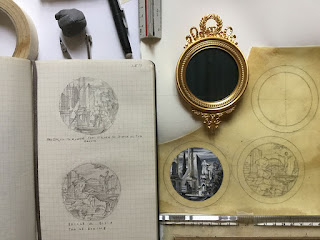 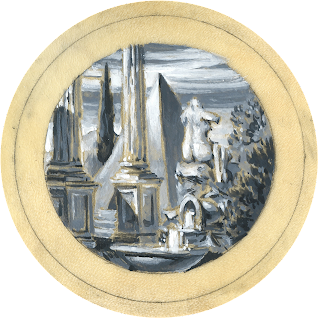 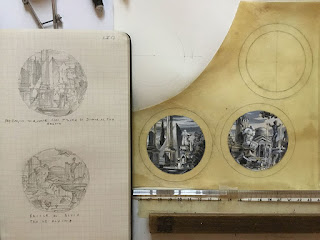 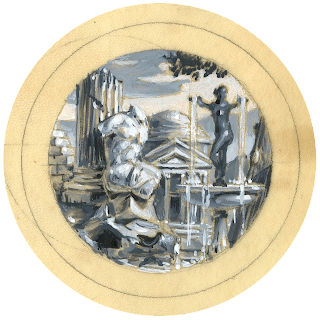 Posted by Emulatio at 13:38 No comments:

Lost, Found, and Made 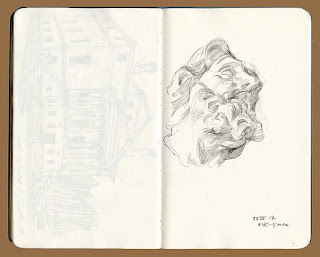 I RECENTLY MISPLACED A SKETCHBOOK. Not one of my more precious ones, it was small and pocketable enough to bring with me without a backpack and a pack of sanguine pencils. A paper Moleskin, I treated it as less precious, which is why I drew in it with ordinary graphite, which I always have in my pocket. Not that I was cavalier about it, and misplacing a sketchbook is, for those of us who rely on them, a constant background fear. So not finding it on a day when I wanted to take it with me, I rifled through my two backpacks, jacket pockets, piles of books, to no avail.

After a week I’d gotten used to the idea that I’d lost it; or maybe it was stolen, certainly not for its own sake but because pickpockets are rife in Rome. But coming to Lucca for Easter I put on a warmer jacket for the Vigil mass, and there it was, grazie Dio. I then remembered that I’d brought it to show the shop where I was having a new leather-bound sketchbook made. Several years ago, before we bought an apartment in Lucca, I was in town with my students and found a leather shop that made beautiful books with handmade Amalfi paper. After working in it for years mostly in sanguine, occasionally adding black chalk, it was nearing its last pages and I was ready for a new one. 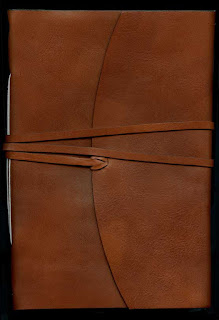 How wonderful, in this plastic, mass-produced or outsourced world, to have something like this made for you. Officina della Pelle is a thriving shop, actually three, in Lucca that makes a variety of leather goods. When you begin using a sketchbook I would advocate using an un-precious one, so as not to be intimidated when drawing, afraid to make a mistake. But when the habit becomes a pleasure, and the work in the book reaches a quality that merits it, a lovely book is actually a spur to drawing even better—and lately, for me, more adventurously.

The food world has been remarkably successful in the last few decades at promoting local and organic food—from produce to cheeses. In the arts we’ve been less good at supporting paper makers, book binders, and other craftspeople who make the “ingredients” artists need to measure up to the past. So, if you know one, indulge in spending a little more to have a book made, to use handmade paper, or work with traditionally-made oil paints. If you don’t, they will most surely be lost, and much harder to recover than my lost sketchbook.
*********

A recent plein air watercolor from Lucca at pleinairitaly 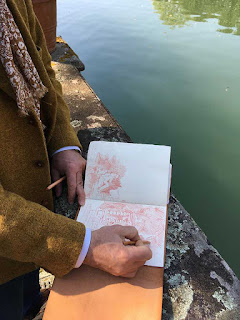 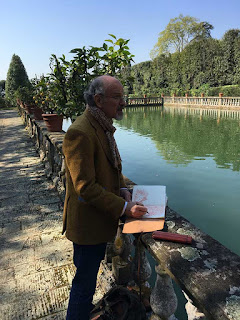 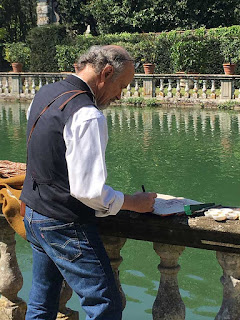 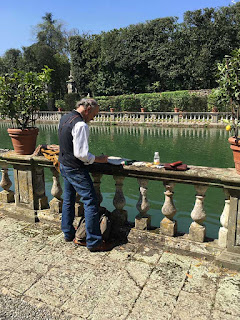 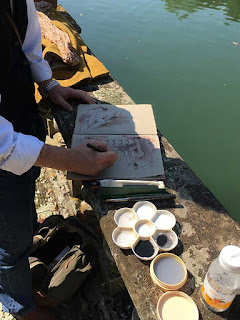 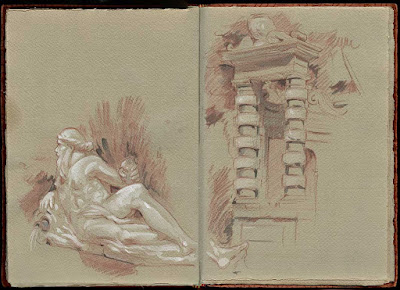 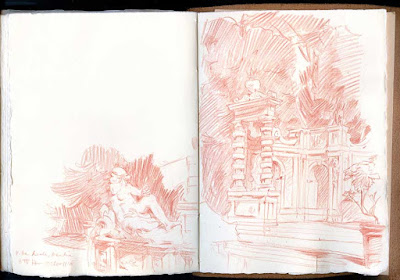 Posted by Emulatio at 15:24 No comments:

I promised myself this blog wouldn't be a rant, nor do too much critiquing, but rather advocate a Renaissance humanist approach to art and architecture for the modern world. I believe this is not only possible, but essential to building a better, more beautiful world.
I've noticed, especially vis-à-vis the visual arts, there is a growing so-called "Classical Realism" movement, and while I might say that's an oxymoron, I notice too there is precious little space for real classicism in painting, sculpture, and drawing. So, here is a little more....
I hope it contributes to a larger cultural conversation, and to that end I very much welcome comments and exchange of ideas. If you are sympathetic to the theme, at least you can know you're not alone....

Drawing on the Masters 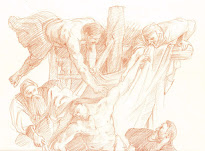 Rubens, Descent from the Cross

Emulatio
I'm a classical artist and architect inspired by the Renaissance and Baroque. 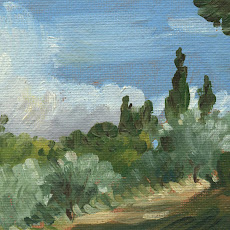